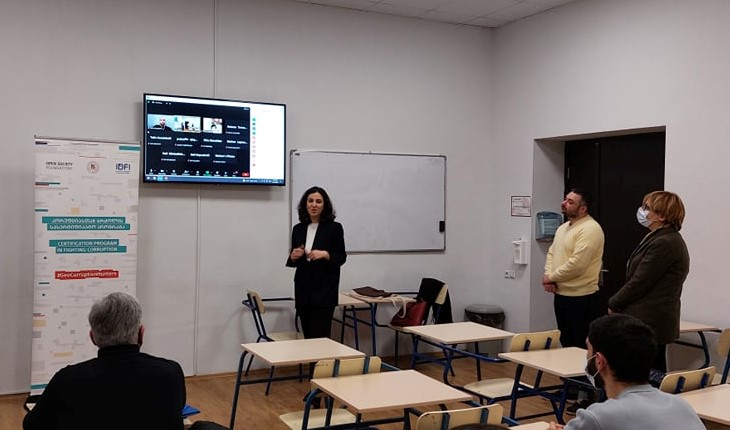 The Spring Semester was opened by the Executive Director of the Institute for Development of Freedom of Information (IDFI), Giorgi Kldiashvili, and by the Dean of School of Arts and Sciences of the Ilia State University, Associate Professor, Nino Mataradze. Parties discussed deepening the relationship between Ilia State University and IDFI, highlighted the importance of having the mixed groups to share the knowledge and experience among the students and practitioners and underlined the necessity to fight corruption in Georgia.

Fighting Corruption – International Actors, Anticorruption Platforms is the subject of the curriculum of the School of Arts and Sciences and the educational course of the Educational Certification Program in Fighting Corruption. As a result, students of Ilia State University after successful graduation of the course have the opportunity to receive the ECTS and the Certificate. The mentioned course will be lectured in hybrid attendance regime which will give the opportunity to the program participants to attend the lectures both online and in person in lecture halls.

The Institute for Development of Freedom of Information (IDFI) started the implementation of the Educational Certification Program in Fighting Corruption in 2019 in cooperation with Ilia State University. The program is financially supported by the Open Society Foundations (OSF) in the framework of the project “Building Sustainable Human Capacity in Fighting Corruption”.